Today I spent a day in Cambridge placing my LOVE O.N.O. cards in newsagents windows throughout the city or at least that was my plan. I was armed with cards of course, packed lunch and a map with all the city's news emporiums.

Of the 12 newsagents I visited 5 let me put up my cards, 5 didn't want any cards in their windows and 2 rejected my art, saying they didn't understand what it was all about. So although it was a fantastic rambling day, dipping in and out of the Art:Language:Location festival I came home with 5 cards (right) in my pocket.

Even though all the cards are being exhibited (and for sale) at Oxfam, 28 Sidney Street I still wanted to make this a live project and place them in real newsagents. All the content was found on genuine dating sites from Cambridge people although I tweaked it a little to add a pinch of spice and humour.

Each card had a phone number so I'm eager to see if we can get any funny responses from the Cambridge public with a GSOH. My first success after 2 initial rejections was at JB Stores on Mill Road, where 'Work Hard Play Hardy' is now there for a week minimum. Cost £1.

﻿
Mill Road proved a successful patch and I followed up quickly with 'The Truth' in Spice Gate. With a window of collaged posters they weren't too choosey about my motivations and didn't charge a bean. This meant that the card might just be there for a day or a month, who knows. I did however contribute to their Gaza donation charity box. Cost 60p

Another couple of blanks kept my spirits down until I stumbled across the smallest of newsagents, J R Convenience Store in Burleigh Road. The young girl behind the counter didn't bat an eyelid and 'Geek Needs Love' found a home. She even offered to put it in there for free, but I had to pop a £1 in her Children In Need charity bucket.

My fourth hit was at Tindalls Art shop who really joined in the spirit of the project and the charming lady behind the counter couldn't help but giggle a little. I didn't get a photo of it in the window because she was so tickled by it she wanted a photocopy for herself. In fact she said the 'Standards In Love' card was SO Cambridge in its content.

After some more rejections it was wonderful to see Robert Good and Matthew Wilson at the English Faculty Library, Sidgwick site for a special live creation by Laura Napier. Who sat and obliterated a document with water and brush, changing it into a blurred wash of blue for her performance Amnesia Painting. Perfect time for lunch too, nothing like watching a bit of organised madness whilst chomping on cheese sandwiches. How very British!

It was tough going after lunch as I made my way back into the streets of Cambridge, past bustling tourists, toffs and Saturday shopping denizens. The newsagents turned me away again and again until I found the kindest of innkeepers to open his stable to my unusual art project.

At first Mr Regents News wasn't keen on my card 'Its all about Priorities' but he warmed to me when I produced a smaller example. Yes, he said, that's more like a notecard, it seems he was questioning my authenticity and not my artistic prowess. Blimey, everyone's a Bryan Sewell, we're not a nation of shopkeepers anymore, but art critics nowadays.

You've got a chance to be a critic yourself, in fact you can't avoid it, as Art:Language:Location have their wordplaying thought-provoking artworks placed throughout the city of Cambridge until the 3rd November 2013.

Check out where you can find it here  http://artlanguagelocation.wordpress.com/

Anybody out there? - Dating in Cambridge

The first 6 cards have been drawn up and are ready to go the printers.
All taken from real Cambridge singles ads with just a little twist each time.
Here they are with an brief explanation of how they've been altered.

﻿
Once printed they'll be placed in newsagents windows across Cambridge city centre.
Some will be for sale in Cambridge's Oxfam shop.
These will be part of the fascinating Art:Language:Location exhibition which runs from 17th October to 3rd November 2013.

#2 - Took out a little content but very little to do, just addition of last 3 words.

#3 - Aiming High - Change in title from 'Home loving' and reversal of words. Born again Christian lady originally wrote she was accepting of a man who had had a few knocks in life.

#5 - Change of words from 'Good time' to 'little upflow furnacing' and 'more' to 'bimetallic coupling'.

#6 - No additional words on this one. A few removed and a simple rearrangement of words to make it rhyme.

#7 - My favourite of this batch. The most satisfying are the statements where you change just one word and the meaning is transformed.
At least a third of women on Cambridge dating sites have children already and rightly are unapologetic about this. It is better to be upfront of course and honesty must be the best policy.
As you might have guessed I changed the word 'children' for 'parents', and 'man' to 'women'.

The Cambridge Cupid is already scouring the small ads for inspiration this week in preparation for a new project. Some of my most mischievous themes are being revisited for the cutting edge Art:Language:Location exhibition in Cambridge next month.

﻿
In 2012 the rambling art collective, SMartwalks, thrust the ephemeral world of twitter out onto the streets of Cambridge for the inaugural ALL exhibition or Text and Context as it was known then. Dotting 32 magnet tweets onto lampposts, railing and unsuspecting road signs we used content from local people with something to say. Not always coherent but always striving to create text in context we had a fantastic day. Plenty of banter too on twitter and a few intrepid people who walked the streets and picked up our magnets.

Well I'm back, unfortunately less of collective as @profhza is exhibiting himself in Texas and @bsfdarren is researching new territory for us in Australia. So I've gone back to my roots.

In 2010 I exhibited 10 magnetic vignettes inspired by real 'lonely hearts' ads at the Open Fridge exhibition at Gallery 89 in Barnet. Even though they proved a quirky success I wanted to explore the genre more and several questions came to the fore. If we are tantalised by 'The One' in our search for love then why do we write generalised statements, we should be more specific. Look for that girl with the limp, blues eyes, likes theatre, fried chicken and keeps pygmy goats, instead of casting the net wider. Be an angler not a trawler!

The other obvious realisation was that the good old GSOH or Good Sense Of Humour is essential. Over 50% of dating statements cite GSOH as either an attribute possessed by themselves or one they search for in a mate. So why are so many of these personal description not funny.

Honesty rates highly in dating wordplay and this is where I fall woefully short. I will be exhibiting 10 Love O.N.O cards in newsagents windows throughout the city centre of Cambridge but all will have been doctored by myself. Although all are inspired by real Cambridge singletons, small changes will be made, a word altered, or the titles invented.

All 10 cards will be exhibited at an Oxfam shop in Cambridge throughout the city wide exhibition from October 17th to November 3rd 2013. The most interesting aspect though will be the 10 cards that find their way into real newsagents' windows throughout the city (October 26th to November 2nd), complete with contact details. Will anyone get in touch? 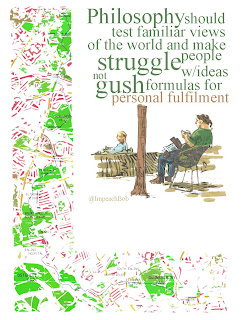 We're busy preparing for our next Re-street/Re-tweet walk. This time it'll be across London where we'll bring some local flavour, humour and profundity back to this vibrant city.
In October we re-streeted New York as part of the Art In Odd Places exhibition. We placed 150 magnetic tweets from locals along 14th Street. You can still see the pictures in the slideshow (right).

One Saturday in November we'll be starting at Harrow on the Hill station walking along the route (left) until we get to Gunnersbury station. Along the way we'll be placing magnet vignettes on metallic surfaces. And yes, we'll be walking the other letters of LONDON in due course.

This time we have a fantastic team of Darren Atkinson (Photography/Social Media), Harvey Wells (Walker/Brains) and Alban Low (Art/Magnets).

If you'd like to participate and live somewhere along this 'L Map' then email us at smartwalks@live.co.uk or on twitter at @albanart or @smartwalks

Check out the images we're going to place in the slideshow right ------>
Posted by Open Fridge at 02:35 No comments: 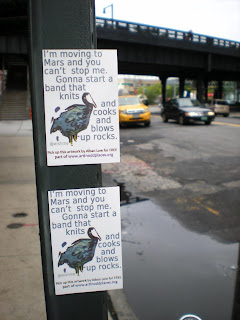 The Art in Odd Places Exhibition was a fantastic and scarey experience. I placed 150 magnets along 14th Street, New York between The Highline and 9th Avenue. The Festival ran from 1st - 10th October 2011 and include over 60 artists from around the world whose aim was to push the boundaries of exhibiting without permits in public spaces.

I used tweets from 75 New York locals. I wanted to re-personalise some of these public spaces that seem to have been scrubbed on any personal/local flavour.

Being on my own added to the spice of the weekend. I was very generously shown around the best Jazz spots by one of the tweeters and good bloke @MikeDiRubbo.

Get in touch with at @albanart on twitter if you fancy a chat.

Cheers, Alban
Posted by Open Fridge at 05:34 No comments: 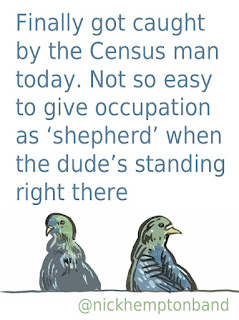 Preparation is under way for a series of exhibitions this summer/autumn in London and New York. Click on the 'New York Catalogue' to see the artwork.

I'm taking 100 tweets from New Yorkers and turning them into magnets. Then exhibiting them in the urban environment and public spaces. Like this classic from Nick Hempton (left).

In September I'll be exhibiting them in the trees of Walthamstow, London - http://www.artgrowsontrees.co.uk/

Then for the big one in New York as part of the Art In Odd Places Festival - http://www.artinoddplaces.org/ 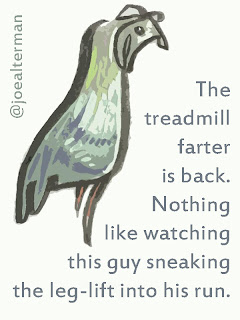 The small art project where I exhibit classic tweets is on hold for a few weeks.

I'm busy preparing for a new adventure. I've been selected to exhibit 100 of these tweets on the streets of New York. Using tweets from New Yorker's themselves, like @joealtermans classic 'Treadmill Farter'.

The exhibition is Art In Odd Places and runs from 1-10 October 2011. I dont know how long i'll be there for but will post here as as i can.

If you're a New Yorker and you'd like me to include one of your tweets then find me at @albanart .

Cheers, Alban
Posted by Open Fridge at 08:04 No comments: